about "every pixel tells a story" 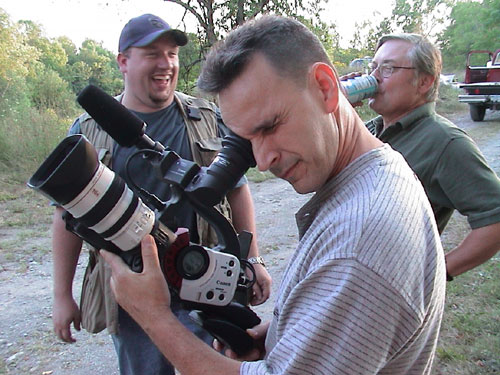 Made on location in Albany, Rensselaer, and Columbia counties

The story behind "Every Pixel Tells A Story" is a simple one because the project came into being quickly and organically. In mid-2002, my departure from a full-time job gave me unexpected free time that coincided with the acquisition of a digital-video camera. I was eager to both play with my new toy and put my unwanted downtime to constructive use. Because I had spent much of the preceding couple of years reporting for upstate New York newspapers on the rise of digital filmmaking, the outlines of a possible project began to materialize in my head. Why not dive into digital filmmaking by making a journalistic documentary about other people diving into digital filmmaking?

I started by consulting a number of colleagues, some of whom appear in "Every Pixel," about the realities of the project. I was able to get editing software inexpensively, and I determined that the equipment required for production was sufficiently portable and user-friendly to allow for a one-person crew. I picked up two tools that proved to be essential -- a $30 clip-on microphone from Radio Shack and a copy of "Final Cut Pro 3 for Dummies" -- and I set on my way. To get my feet wet, I contacted the organizers of a local student-film program and asked to tag along for a day of production. I spent a fun afternoon in Chatham, N.Y., taping high-school students as they fumbled through production of their collectively made short film. The experience quickly taught me how mobile my camera was, and what the limitations were in terms of picture and audio quality. I assembled my footage from that day into a quick "making-of" short that was shown in tandem with the students' project at the 2002 FilmColumbia festival.

The "making-of" short allowed me to see a small-scale digital project through from conception to exhibition, so I knew what I was in for when I started "Every Pixel." I had a tremendous advantage because of my familiarity with the subject matter, of course; I had interviewed nearly all of the "Every Pixel" participants for print stories covering many of the same topics. So when I sat down with my first interview subject, Mike Camoin, I didn't have a learning curve when asking him about how he makes his Adirondack-themed projects. Instead I just had the learning curve of interviewing for camera. First lesson: Be careful about taping outside without a windscreen on the microphone!

The project went amazingly fast. Only nine weeks passed between my first sit-down with Mike to the first public showing of the completed 81-minute project. I did virtually everything myself, from setting up the camera and microphone to editing picture and sound, which was an invaluable experience. I learned the ins and outs of Final Cut on the fly, and applying lessons from my years as a print journalist allowed me to assemble the interview bits into a coherent narrative. It really was the best possible way for me to transition back into filmmaking after a long, unintentional hiatus.

Because the project largely comprises "talking head" interviews, there aren't too many amusing production mishaps to relate. I was pretty painstaking when I set up interviews, carefully picking camera angles that allowed room for gesticulation, but I still managed to make some embarrassing mistakes. I'm visible as a reflection in one two-shot; another two-shot is lopsided; a pair of singles are overlit; and in general I lacked the forethought to "cover" most interviews in multiple angles. I didn't have anywhere near enough options during editing.

Having said all that, I'm happy with the piece for what it was, and I can still enjoy it if only for the contributions of other people. The picture began my working relationship with composer T.J. Raider, whom I think contributed wonderfully atmospheric music beds that move the talky bits along. And I'm glad actor David Bunce came aboard to record the narration, because I'm so critical of my own limited performing skills that if I had tried to record the narration myself, the project would never have been finished. In fact it's a wonder David's voice appears at all; I botched the first recording of the narration track and poor David had to run through the whole session again.

The full 81-minute version of the movie seemed to zip along well enough when I was caught up in the excitement of finishing the project, but when I look at it now it seems indulgent. I'm sure I was so desperate to notch a feature credit after years of frustration that I let the piece spread a bit past its natural parameters. (Did I mention I originally envisioned a 40-minute running time?) So it was quite fortuitous that when I looked into broadcast opportunities, Albany-based PBS affiliate WHMT-TV expressed interest in an abbreviated version. About one month after the first screening, I whittled the movie down to 55 minutes, and I now much prefer the telecast version. For one thing, the piece is shorter and speedier; for another, it includes a climactic montage that I created for the TV version and which features T.J.'s music prominently to great effect.

Four years later, I still consider the 81-minute version of "Every Pixel Tells A Story" my first feature, and the circumstances surrounding its creation certainly suit some of my romantic ideas about filmmaking. It came about spontaneously and grew from my relationship with a vibrant creative community; it's got rough edges and shortcomings that reflect the speed with which it was made. And while I don't think the 81-minute version is bad, precisely, I feel much more confident presenting the shortened TV version. (That's why the TV version is the one I'm making available through this site.) I sure don't think "Every Pixel" is perfect, but it absolutely captures a moment in time. On a personal level, it says a great deal about where I was as a filmmaker circa 2002. And on a storytelling level, I think it still says something hopeful and friendly about the optimism, sometimes naïve and sometimes justified, that energized the Albany, N.Y., film community at the beginning of the digital revolution.

Plus it turns out the story behind "Every Pixel Tells A Story" isn't over. Ray Ortali, an academic based in the Albany area, recently contacted me about using the film as part of an adult-education course titled "Hollywood on the Hudson." He's also expressed interest in doing a sequel of sorts that will catch up with some of the filmmakers featured in "Every Pixel" and introduce viewers to new filmmakers who've emerged since my movie was broadcast. Considering that I haven't lived in the Albany area since that time, I'm just as curious to see what's arisen in my absence as I was to learn what was happening while I lived there.

Here's a progress report, circa late 2006, on some of the artists featured in "Every Pixel."

Joe and Dan Masucci followed up "Murphy's Law" with the well-received short "The Last Round," which they subsequently adapted into a 2005 feature. (I cowrote the script for the feature, which has yet to land distribution.) After scraping together remarkable production resources on a tight budget for the feature, they decided to back away from their patented "guerrilla" style, and they're currently prepping a new feature project. Oddly enough, they're planning to move opposite the industry-wide migration by setting aside video to shoot the new project on 35mm film.

Brandon Bethmann and Eric Szmyr finished "Raising Hell" and got a DVD distribution deal with Sub Rosa Studios. They completed a follow-up project, "The Risen," in 2004.

Several projects featured in "Every Pixel" remain shelved. Justin Maine and Michael Swantek put their ambitious movie "Wik" aside because they'd outgrown the project by the time the protracted post-production process wound down. Joe Glickman's documentary about the Classics IV rock group, Steven Leibo's nonfiction movie about connections between Vietnam and Albany, and John Holser's doc about indie filmmaking all remain unfinished as of this writing.

Tom Mercer took over for John Holser as director of "UnCivil Liberties," a feature project that grew out of the "Face of the Enemy" short. The completed political thriller was picked up for DVD distribution by a company called Ariztical. Mercer's next project is a major TV documentary about Benedict Arnold.

And the Upstate Independents organization is still going strong.